For students to fill in

As you can see your brain has multiple and vital functions. Some of them are ordered by you and others are done without you even noticing. For each different function your brain has an area that deals with that specific job. For example what part of your brain are you using to read this right now? Well in fact it is not just one specific part but multiple parts of the brain that help you see, read and understand what I'm writing.
This brings us to what we did next. We were given a diagram similar to this one so that we would be more familiar with the names, functions and placement of things in the brain. 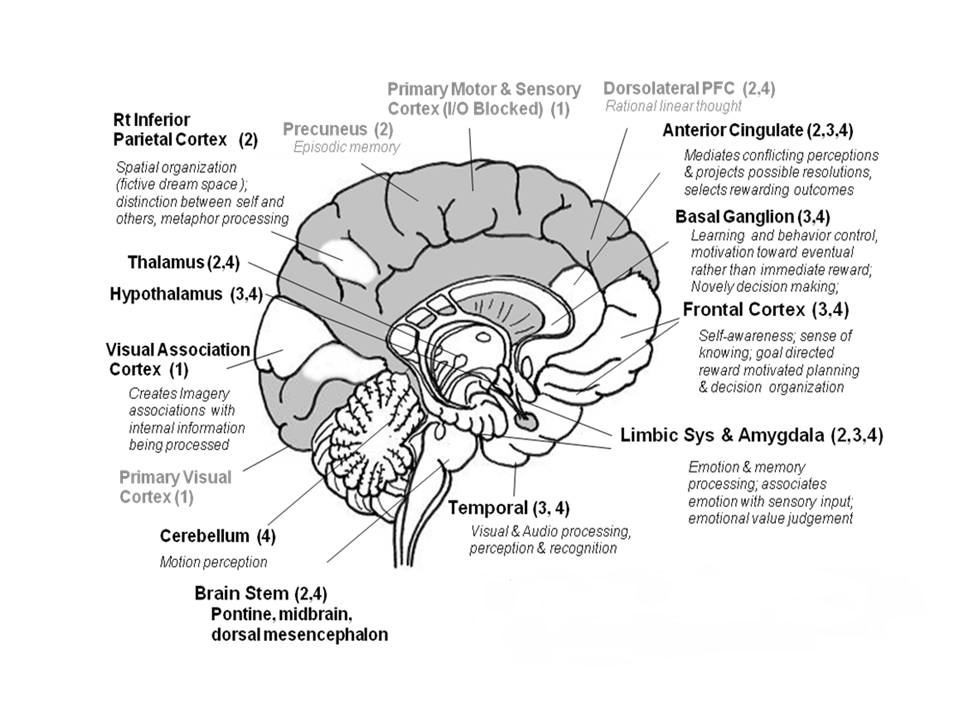 This helped us with the exercise we were given next. These are PET (positron emission tomography) images of the brain doing different activities. Using our knowledge of the brain, based on the diagram above, we were able to identify the activity in question. 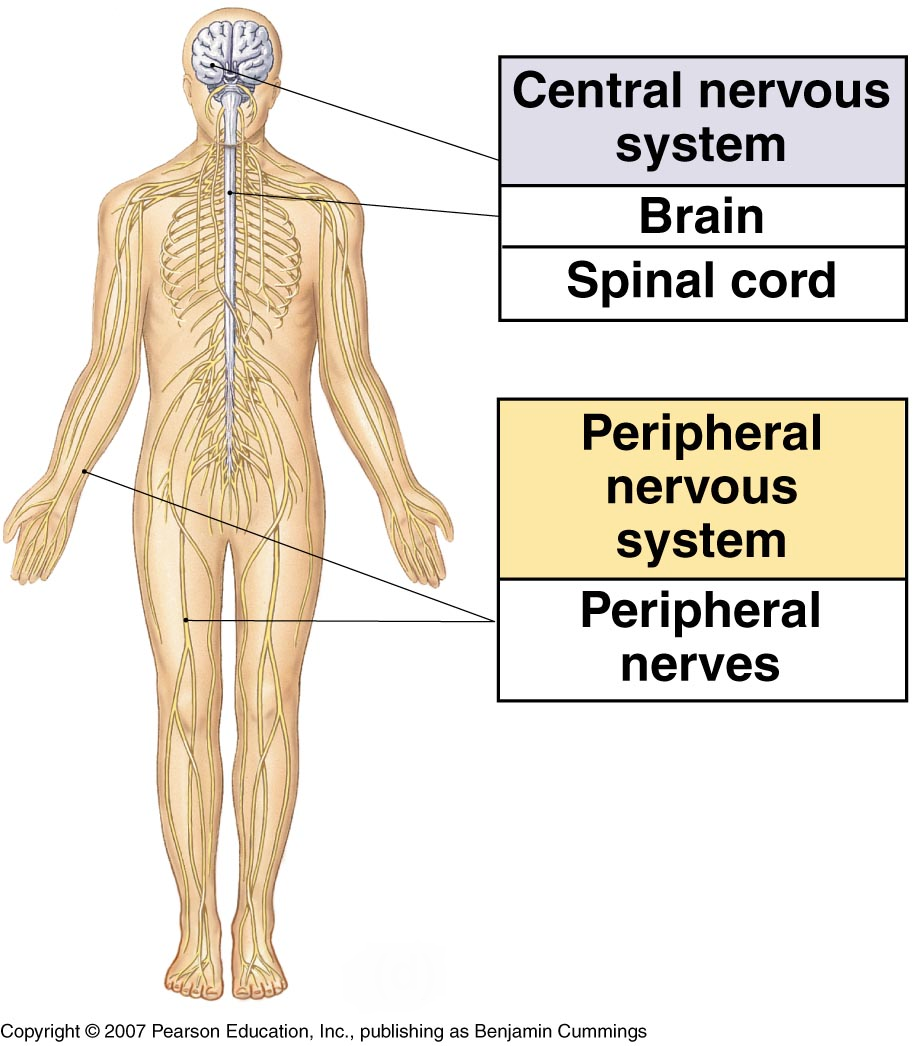 Dissection of a brain

In this experiment, we dissected a calf's brain. We started by placing the brain in the tray. Then, with the available tools, we explored the different parts of the brain and tried to label them. I cut through a lot of parts in the brain to see the internal structure and I found out that they all had a similar structure on the inside. The brain was softer than I thought and it made it harder for me to handle. The dissection helped me understand how things were placed and at the same time helped memorize the different functions of specific areas in the brain.

the materials we used in this experiment were the following:

I positioned the brain in a way that allowed me to see the superior part of it. Although the two hemispheres detached from each other the moment I put the brain on my tray, the cerebellum was still firmily attached. This in a way made it easier for me to observe the two sides of the brain seperatly. The corpus callosum is the white stuff that holds the two sides of the brain together but in my case it was cut. The brain is filled with crevasses. The actual crevasse is called sulcus and the space between them is called gyrus. 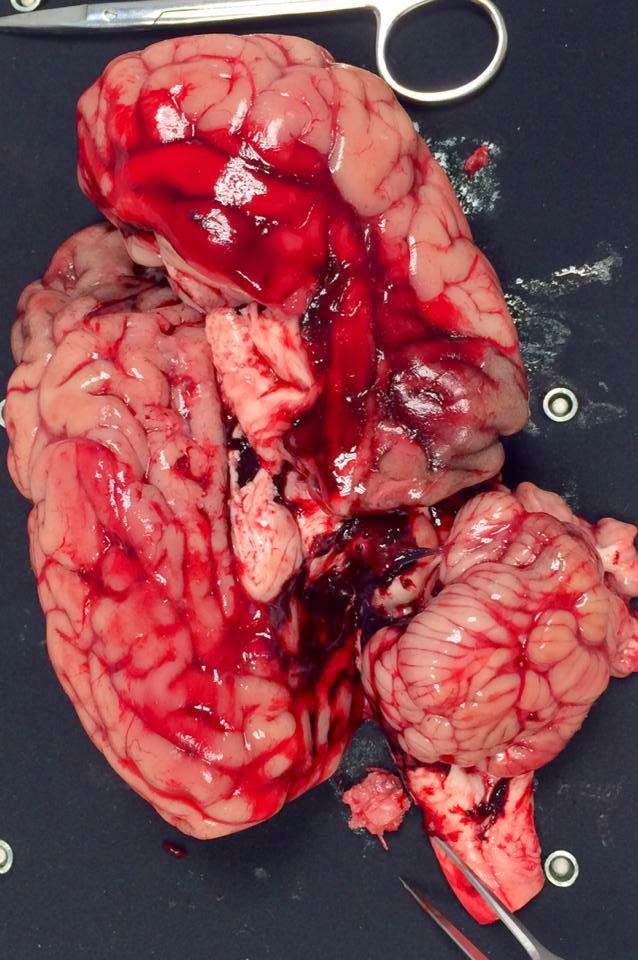 Then cut open the cerebellum to examine the insides and saw the white and gray matter. 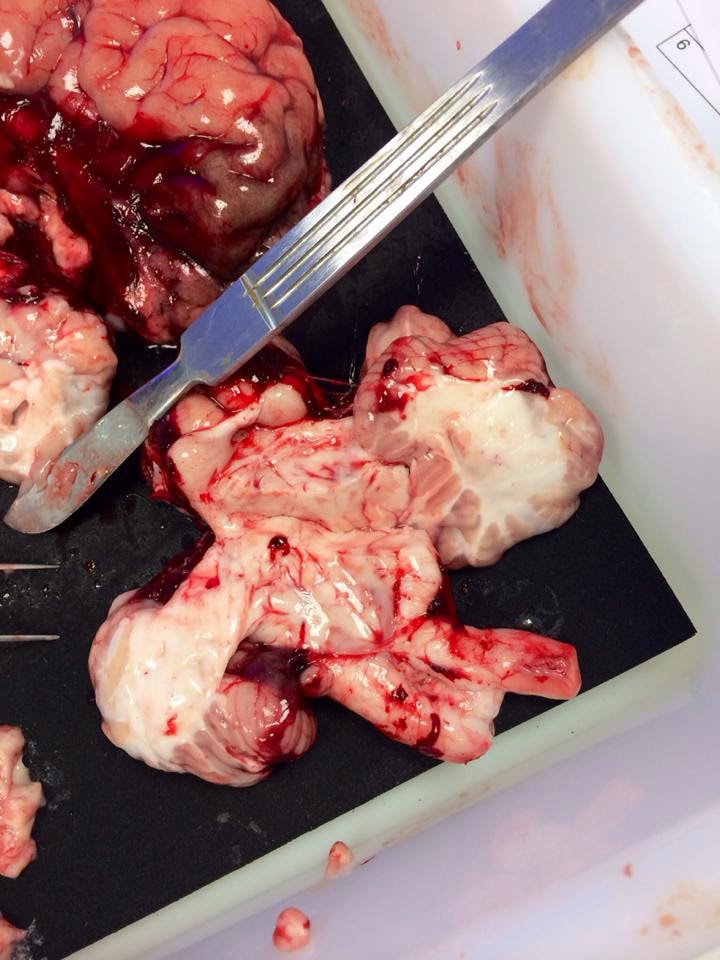 I also cut the medulla open which was tougher and saw the beginning of the spinal cord. The picture also shows the pons on the right bottom corner. 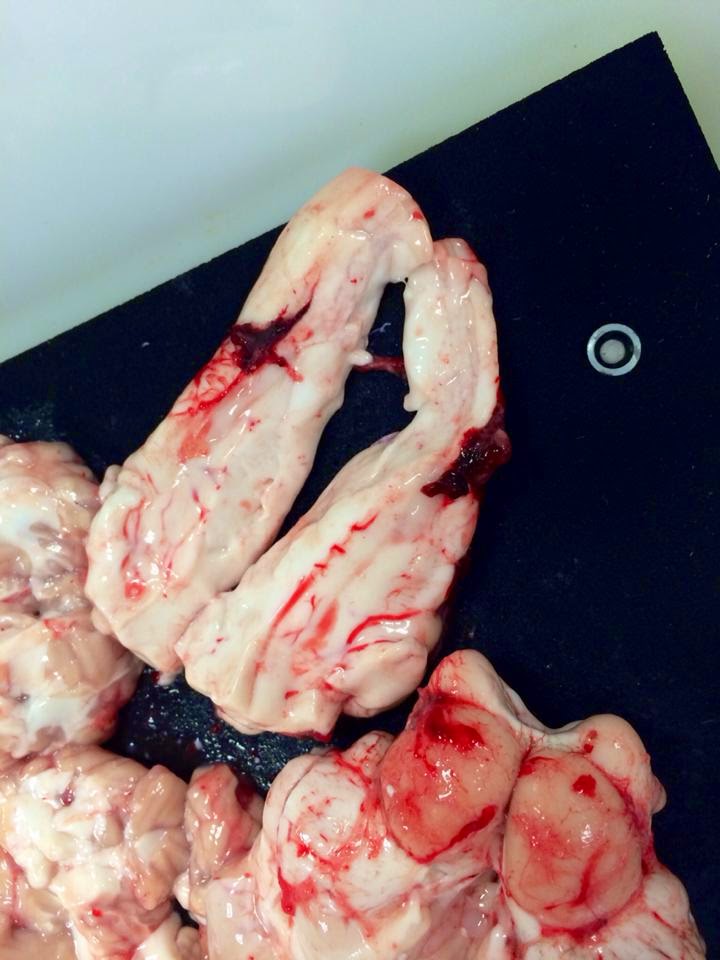 I took the left side of the brain and cut it open and saw the same two kinds of matter that were in the cerebellum, the white and gray matter. 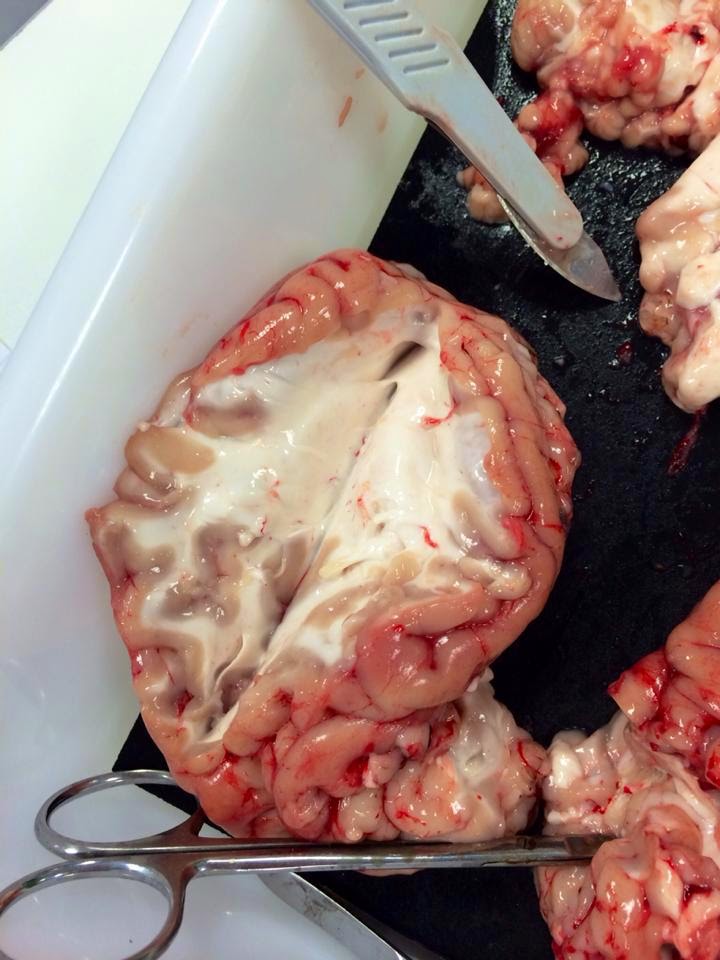 I observed and labelled different parts in the brain all throughout the dissection. I noticed how flexible and fragile the brain was at some parts. This made it harder for me to handle and when I cut one of the hemispheres of the brain open, the white matter seemed to almost fall out completely because of how soft it was. This is why the brain has maximum protection around it, like the skull, the cerebrospinal fluid that surrounds the brain to cushion it, and a series of membranes the first one being dura mater which acts as a kind of seatbelt.

Obviously these were not on the brain when they were given to us otherwise it would have being a lot harder to cut through it. When cutting through different parts of the brain I realised that they were all composed of the same thing, grey and white matter. The white matter serves as a sort of insulator in order to keep the current flowing through the grey matter which is full of nerves. This helps avoid any chemical and electrical signals from neurons to move randomly, and ensures they reach the correct destination. I also learned that the reason why the brain has many folds (filled with veins) is to take less space and fit inside our skull.
What made this experiment difficult was labelling the different parts of the brain since there was no line telling you when it started and when it ended. I also never found the hippocampus.

The brain of a calf is very similar to that of a human and so gives us a clear idea of what our brain looks like. It also helps us understand how the parts fit in a 3D space rather than looking at it on a flat piece of paper. After this dissection I am even more fascinated about the brain and the functions it performs. The brain is one of the most amazing organs, it keeps our heart beating without conscious effort and is parallel processing all the time. The brain is a highly complex organ that remains an object of scientific study.